Christine has written the Free Rein series for 8 – 12 year olds.  It focuses on three young girls, Jacqui King, Geordie Smith and Hannah Johnstone.  The girls love ponies and in time learn about caring for their own, how to ride and how to navigate through life together.  There is a lesson learned in each novel and the Christian faith is incorporated.

Below are blurbs from the Free Rein Series books. 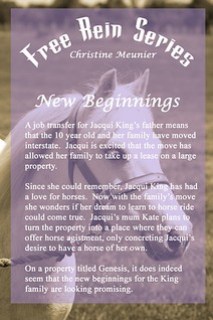 A job transfer for Jacqui King’s father means that the 10 year old and her family have moved interstate. Jacqui is excited that the move has allowed her family to take up a lease on a large property.

Since she could remember, Jacqui King has had a love for horses. Now with the family’s move she wonders if her dream to learn to horse ride could come true. Jacqui’s mum Kate plans to turn the property into a place where they can offer horse agistment, only concreting Jacqui’s desire to have a horse of her own.

On a property titled Genesis, it does indeed seem that the new beginnings for the King family are looking promising.

2. In Pursuit of a Horse 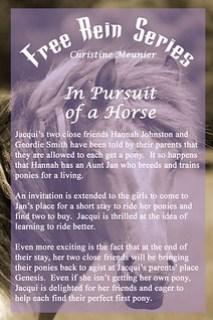 Jacqui King has settled in well at her family’s new property Genesis. She has even made some horsey friends.

Jacqui’s two close friends Hannah Johnston and Geordie Smith have been told by their parents that they are allowed to each get a pony. It so happens that Hannah has an Aunt Jan who breeds and trains ponies for a living.

An invitation is extended to the girls to come to Jan’s place for a short stay to ride her ponies and find two to buy. Jacqui is thrilled at the idea of learning to ride better.

Even more exciting is the fact that at the end of their stay, her two close friends will be bringing their ponies back to agist at Genesis. Even if she isn’t getting her own pony, Jacqui is delighted for her friends and eager to help them each find their perfect first pony. 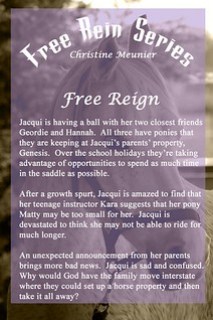 Jacqui is having a ball with her two closest friends Geordie and Hannah. All three have ponies that they are keeping at Jacqui’s parents’ property, Genesis. Over the school holidays they’re taking advantage of opportunities to spend as much time in the saddle as possible.

After a growth spurt, Jacqui is amazed to find that her teenage instructor Kara suggests that her pony Matty may be too small for her. Jacqui is devastated to think she may not be able to ride for much longer.

An unexpected announcement from her parents brings more bad news. Jacqui is sad and confused. Why would God have the family move interstate where they could set up a horse property and then take it all away? 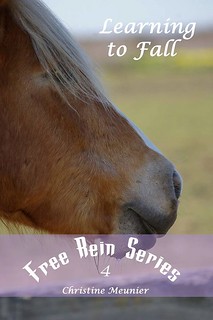 Jacqui is struggling to cope with the return of Matty and not having a pony. As she comes to grips with this, her friend Hannah plants the seed of asking to lease another pony.

As Jacqui battles to find the courage to ask her parents, she finds God has already provided a means for her to secure a dream pony. But is it still a dream if you keep falling off and lose your confidence?

Jacqui King finds that getting her dream pony isn’t all she expected and now she has to learn persistence. That’s not all she’s learning with her new pony, learning how to hit the ground and get back up is also necessary. Does she really want this?

5. A Dollar Goes a Long Way 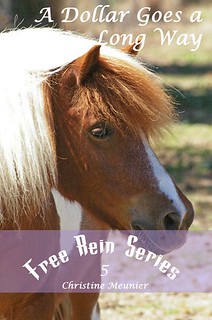 Jacqui, Geordie and Hannah are off to visit Hannah’s Aunt Jan again, this time to help her with a horse show. Dollar, a chestnut mare with a flaxen mane and tail needs a smaller rider for the show she’s been entered into and the three girls are only too eager to help get her ready and present her in the show.

The girls find their efforts rewarded with a monetary gain. Pleased that a little mare named Dollar also resulted in them getting some money, where their new found riches should be invested comes into question.

God teaches us to give a small amount from the multitude He’s blessed us with. As Jacqui learns about this concept, she realises it’s not only her finances that she can invest to reach out to others. 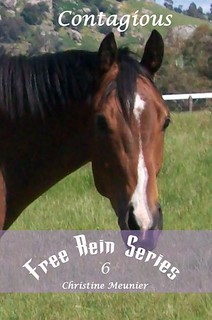 Not everything that can be caught by another person is a bad thing. As Jacqui, Geordie and Hannah learn about managing the health of their horses and avoiding contagious germs, they learn that their attitudes can be contagious, too.

When Captain and Jaq fall ill, Jacqui questions what else she can do instead of riding. The timing couldn’t be worse – she needs to practice for her upcoming dressage test.

Unexpectedly finding herself spending time with Jared, Jacqui is surprised when he declares he wants to learn to ride. And he wants her to teach him. Should she say yes?

Hannah is devastated to learn that she may lose her beloved pony Jasper. Her parents are struggling financially and conclude that a pony and its associated care, cost too much.

As Jacqui learns about her friend’s sad news, her eyes are opened to the concept of something that is broken. She observes Hannah’s personality change as she focuses on her disappointment and anger at losing something she loves.

Jacqui and Geordie work hard to find ways for Hannah to keep Jasper. As they do this, they learn about the broken spirited who are comforted by God. Jacqui questions if her God can help to comfort her friend and ultimately turn the situation around. If not, she fears her friendship with Hannah will be broken. But can God comfort Hannah when she doesn’t know who He is?